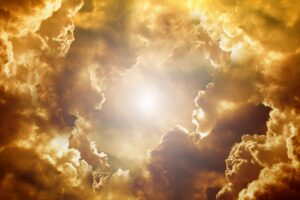 There is no absolute good (neither is there absolute evil) in our world. Every good thing is corrupted by evil. Due to their contrast and conflict of interests, there cannot be any peace between the two – only fight and even war. And the question is: Which one will prevail? Left to itself, this war can only end with the evil winning over good due to it being brutal, unscrupulous, cruel, violent and other similar things. Evil will never quit the battle on its own, because this is the only way it can exist: by taking advantage of and exploiting good. Bad cannot humble and subject itself (in order to serve), but can only take and abuse (in order to be served). It will stop fighting only if it is forced to do so by someone who is stronger than it and who has no evil in him. Evil can possibly be suppressed by someone who is more good than bad, but it cannot be completely eradicated, because the evil in the other one, no matter how small, will ally to the evil in the first one and act in the intruder’s favor because it has the same interests.  Only a being that is absolutely good, such as God, can intervene in this battle and gain the victory for good.

But does God want to do this, and how can we know if He does? One way to know it is to see whether He has already started doing it, because this will show that he wants to do it. Do we know some cases in which good prevails over evil, albeit partially? We do. The world is what it is, precisely because it is full of such cases, ranging from the small victories over laziness in our everyday lives to the big victories of ending the wars around the world. Most of us think that this is done by our own efforts, but I don’t believe that this is the whole truth. It is true that we are the ones who do it, but do we fully consider the way we do it? How do we overcome laziness, for example? Which is easier – lying in bed and doing nothing or getting out of bed and doing something? The answer is clear. What is it then, or – rather – who is it who empowers us to start acting? Obviously, it is someone who is more powerful than us and our laziness. How does a war end? It ends when the will for peace and life prevails over the will for war and death. Is that the result of human efforts only or is it again because someone else who is stronger than us and our destructive actions intervenes and overpowers them so that they are no longer effective? Who starts the war in the first place? Isn’t it precisely man who hasn’t found another way to resolve the conflict but fight and kill? How does it happen that they begin to desire exactly the opposite of what they have been desiring so far? It is logical to suggest that they do that because a power that is greater and stronger than the power of war makes them do it or stops them from going into utter destruction. All such victories, though partial, point to something that can fill us with hope and confidence: God hasn’t left the world to itself, but is actively participating in it, offering himself as an alternative to evil that each of us can choose and responding to every cry for help by giving the victory over evil both inside and outside us – over our opponents – while also changing the circumstances contributing to the existence of this battle.

If He is giving those partial victories now, what is the probability that He will desist from giving the full victory over evil in a future moment, which He calls “the day of judgment and destruction of the ungodly” (Second Epistle of Peter Chapter 3, Verse 7), in which He “brings justace to victory” (The Gospel of Matthew Chapter 12, Verse 20)?  But if He can bring it then, why doesn’t He give it now? To answer this question, it is good to ask another question first, which is: What would it mean to give this victory now? One of the things it would mean is the complete destruction of evil within ourselves. In order to do this, however, God needs our consent, because He cannot do anything without us allowing Him to do it (because He has created us to be free and agree or disagree with what He wants us to do and to be)? However, our understanding of evil does not always coincide with God’s understanding of evil, which is a very serious problem as it prevents God from acting. This controversy requires time for man to comprehend the true nature of evil in order to agree with God, whose understanding is the only right one, which makes the present struggle between the two and our participation in it necessary and continuous. When we consider every person (including the child who is being born at this moment), we understand that the world – such as it is now – must continue to exist until everyone will agree with God’s understanding of evil and will allow God to destroy it both inside and outside him (or her) (while cooperating with Him), or will disagree and keep living with the evil he considers to be good (while also cooperating with it) and contributing to his growing victory, thinking he is doing and experiencing something good.

But true good cannot be imitated or faked. It is like light or water or joy or – most of all – love and has properties and abilities that evil can never have and exercise, one of which is faithfulness. God is faithful and will remain faithful forever to those who want Him. But He is also loving, caring, dedicated, self-sacrificing, responsible and many other things… all of which we know very well because we also have them, and which, taken together, unequivocally lead to one thing – a full future victory of good over evil in both each one of us who want it and over those who do not want it, but cannot prevent it, because they are not as powerful as God, who has created them and who has also created the world in order to make it exist eternally in goodness and light, which He will surely do because it is His world and one of the ways He has chosen to exist!