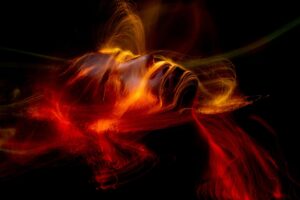 “As I watched, I noticed a windstorm coming from the north—an enormous cloud, with lightning flashing, such that bright light rimmed it and came from it like glowing amber from the middle of a fire. In the fire were what looked like four living beings. In their appearance they had human form, but each had four faces and four wings. Their legs were straight, but the soles of their feet were like calves’ feet. They gleamed like polished bronze. They had human hands under their wings on their four sides. As for the faces and wings of the four of them, their wings touched each other; they did not turn as they moved, but went straight ahead. Their faces had this appearance: Each of the four had the face of a man, with the face of a lion on the right, the face of an ox on the left, and also the face of an eagle. Their wings were spread out above them; each had two wings touching the wings of one of the other beings on either side and two wings covering their bodies” (Ezekiel Chapter 1, Verses 4 to 12).