Many people say there is no God. They say the universe is a happy combination of fortuitous circumstances and life is a result of natural processes by pure chance.
I believe in God and I believe in the God of the Bible, but I would like to try and imagine for a while that they are right. What would that mean?
Among all other things, no God for the universe as a whole would mean no control whatsoever, including no control on the way the universe is constructed and functions, and no control on the way people are made and act. If that was so, what would guarantee that they would continue to be structured and functioning in the same way? Is it because we want them to or is it because we have the power to make them to? How does a drought occur? 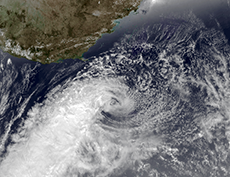 Or a tornado develop? Or a tsunami arise? Do we want them? Can we predict them? Are we able to stop them? The obvious answer to all these questions is negative. What then makes us so confident that the world would continue to be the same tomorrow as it is today if we cannot even forecast the long-term weather conditions in a particular geographic region, not to mention the whole earth?! But if there is God who had created the universe in such a way as to ensure its continuity and stability, and who exercises control over everything that is happening, we might at least expect some rationale.
No God would mean no law-giver. For one thing, that would mean that the laws by which all things are functioning came into being accidentally. But if they came into being accidentally, they can also stop being or change into something else accidentally! Most probably God can do that too — not accidentally, but designedly — if He wants. And indeed, He will do exactly that when the time comes! John, the writer of The Book of Revelation says he “saw a new heaven and a new earth; for the first heaven and the first earth passed away” (Revelation 21:1). However, for the time being, God sustains the world such as He made it to be after the flood preserving His promise never to destroy again every living thing: “While the earth remains, seedtime and harvest, and cold and heat, and summer and winter, and day and night shall not cease” (Genesis 8:22). The absence of a law-giver could also mean change of present laws into something that might bring death, or worse still, permanent suffering to all of us. Death or temporary pain would be a strongly desired alternative in that case.
If there was no one who gave the laws, then distortion of laws would just be a next stage or a change of laws, not a question of right or wrong, or good or bad. But is that so? I can think of several examples of violation of natural laws with catastrophic consequences (industrial accidents, nuclear explosions, epidemics, famines), but I can’t recall any violation of a natural law with a beneficial effect on life. As for the violation of moral laws, I can give you just one example, and you will immediately agree that there is difference between right and wrong, and good and bad. Imagine somebody breaking into your house and stealing all of your property. What would you call that? Would you call it a change of circumstances or an event without any relevance to your life? No, you wouldn’t. You would agree with me even more quickly if that person didn’t touch any of your property but kidnapped all of your children or killed them. And what would you do if that happened? Would you let that person go or would you want him to be tried and convicted? The answer is again obvious. However, that could happen if only he was caught and his crime proven. If not, he would continue to live without being punished — ever. For that will happen if there is no God to punish him after he dies as the Bible says will happen.

“Then I saw a great white throne and Him who sat upon it, from whose presence earth and heaven fled away, and no place was found for them. And I saw the dead, the great and the small, standing before the throne, and books were opened; and another book was opened, which is the book of life; and the dead were judged from the things which were written in the books, according to their deeds. And the sea gave up the dead which were in it, and death and Hades gave up the dead which were in them; and they were judged, every one of them according to their deeds. Then death and Hades were thrown into the lake of fire. This is the second death, the lake of fire. And if anyone’s name was not found written in the book of life, he was thrown into the lake of fire” (Revelation 20:11-15).